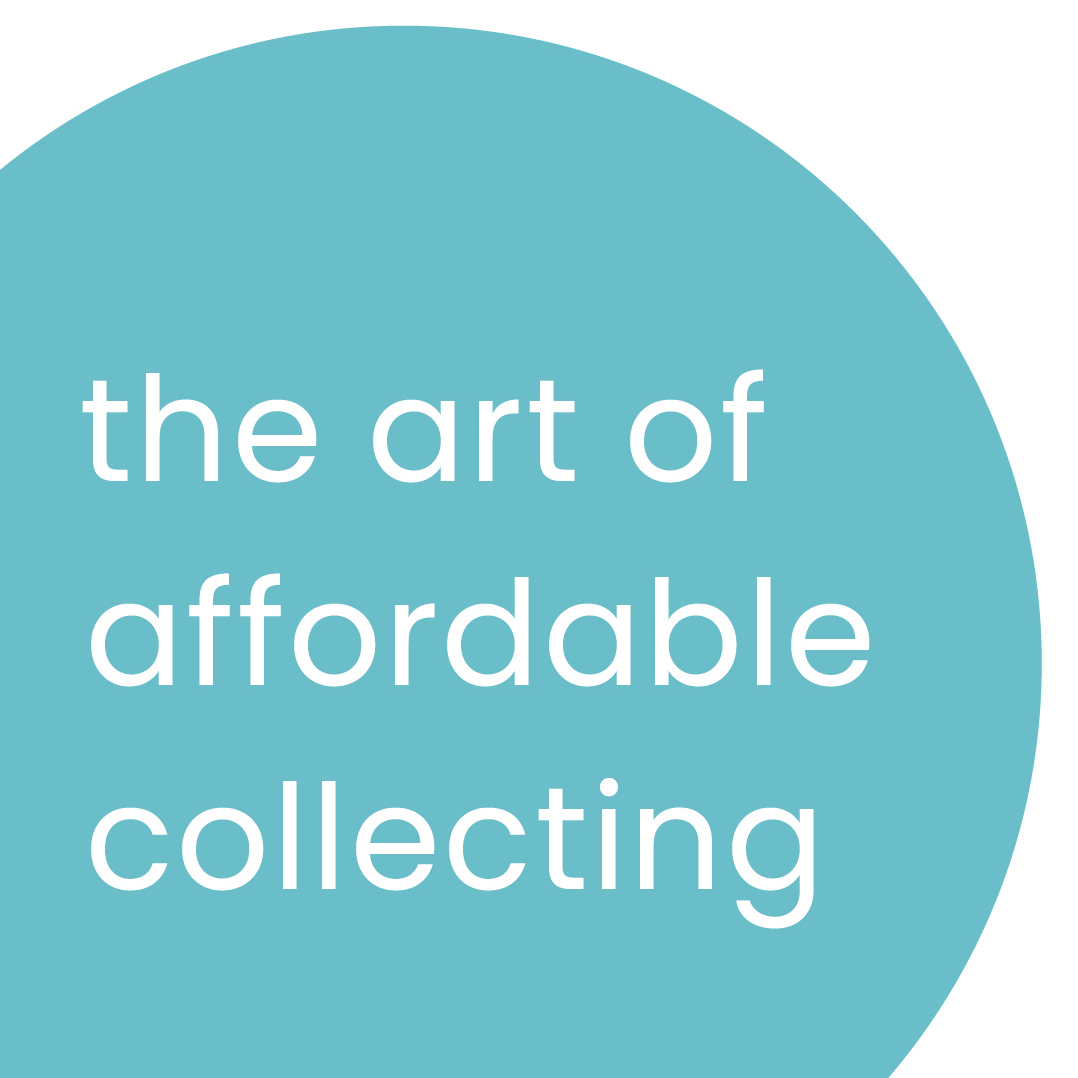 The Art of Affordable Collecting
Persons Projects has created a new section that focuses on how to start and develop a photo collection for those who are not familiar with buying photography. On our Instagram twice a month we propose a carefully selected photographs. We are specifically offering a selection of works by established artists in smaller sizes as well as an emphasis on younger artists in the beginnings of their careers, whose works are modestly priced. This collection is also now on our website.
Why collect photography, how to do it wisely, and what to look for in young artists?
From a price-point perspective, photography is one of the more accessible mediums, to begin with. We advise young collectors to purchase works that challenge as well as inspire them. It's equally important to be able to live with and appreciate the collection your creating. The value of any piece is a combination of aesthetics, content, and how it challenges you. Build your collection around who you are and how it reflects your views in general. By supporting emerging artists, the collector becomes part of that individual's professional orbit, and it's emotionally rewarding in following the development of a young artists' career.
Why collect the Helsinki School?
It represents a 25 years history of six generations of artists that utilizes the photographic process as a tool for conceptual thinking. It's the longest sustainable platform of its kind worldwide and has generated over 180 publications of artists plus 6 volumes of the Helsinki School book series. Its artists are represented throughout many significant museums in Europe, South America, and the United States.
If you have any questions, please don't hesitate to contact us: berlin@personsprojects.com 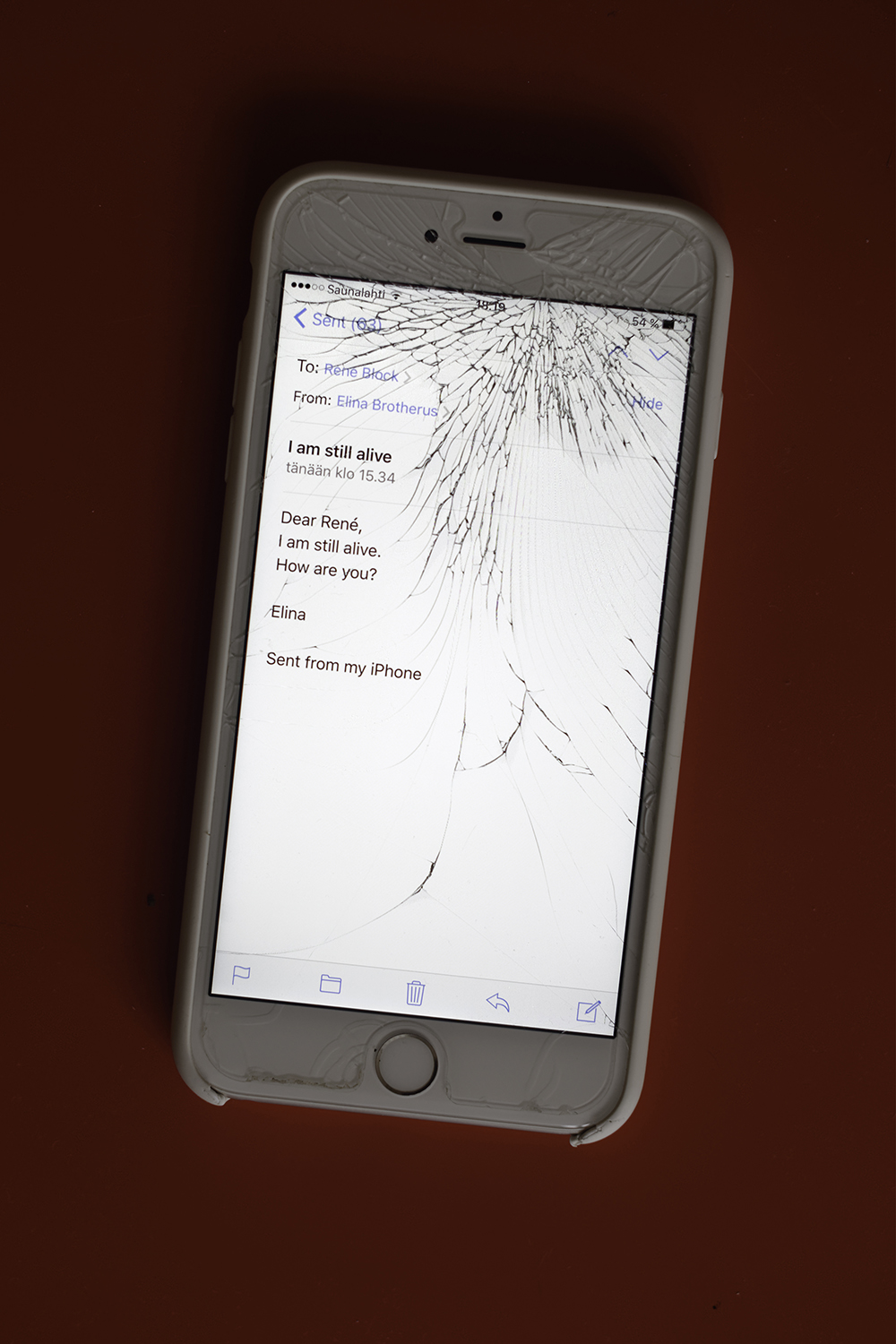 We recommend Elina Brotherus to begin with, who is one of the most well-known artists within the Helsinki School. Her works have alternated between autobiographical to art historical approaches, utilizing nearly any aspect of her personal life to those of the most iconic images from 19-20th-century paintings. Brotherus' most current focus is directed towards works from the 1960-70s.Her fascination with the Fluxus movement begins with the legendary German curators, René Block and his wife Ursula. Rene Block's gallery and Ursula's music store were the principal sources for Fluxus art in Europe. Through their friendship and time shared, Brotherus had both the opportunity and sources to begin her series with a work dedicated to On Kawara's project I Am Still Alive that consists of a series of telegrams sent over a thirty-year period to a wide range of recipients bearing the message "I Am Still Alive". Brotherus’s interpretation of this Kawaras’s work embodies both the spirit as well as the irony that was fluid within that Fluxus period at time. Brotherus emphasizes, "it is not about mimicking another artist's original performances, but studying and understanding the written protocols, the so-called 'event scores'." 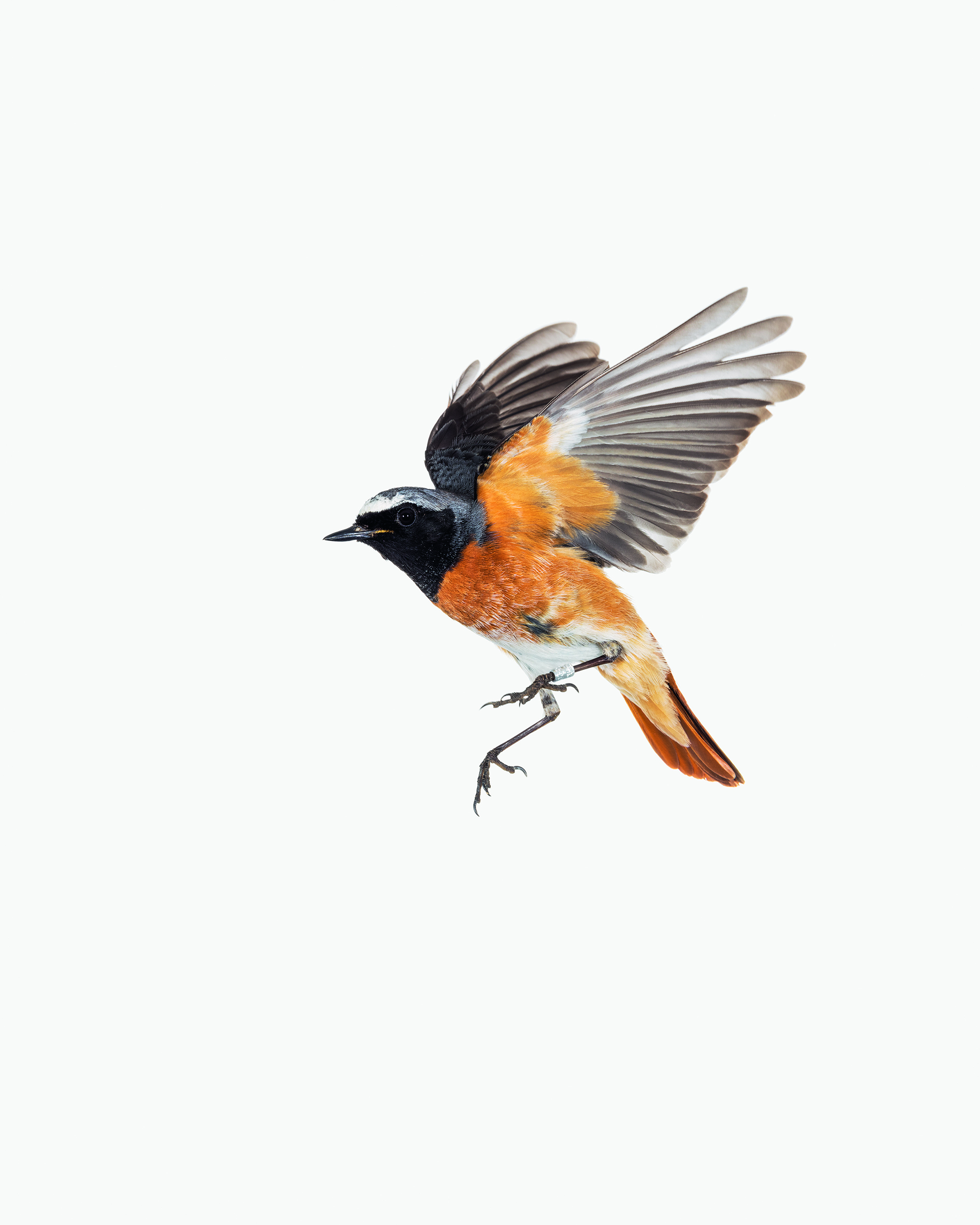 Sanna Kannisto, Phoenicurus phoenicurus, 2019
Archival pigment ink print, 40 × 32 cm
Sanna Kannisto is one of the most unique and distinguished artists from the Helsinki School. She explores the intersection between nature, science, and art. Her photographs are a study of different methods, approaches, and theories in how humankind interacts with our natural environment. During her numerous stays in Peru, French Guiana, Brazil, and Finland, she became a visual researcher, borrowing working methods from the natural sciences, anthropological practices, and from still-life painting. To create her images, Kannisto builds portable temporary stages or, in her words, "field studios.” Kannisto states: "I like the fact that in the act of flying, the bird’s stopped motion is so sculptural. The speed of the bird is challenging to frame, and I’m able to rotate it in space through photography.”
The work Phoenicurus phoenicurus, is dedicated to a relatively common summer migrant from winter grounds in Africa. This small bird has a distinctive habit of shivering its bright orangey tail.

berlin@personsprojects.com
________________________________________________
Janne Lehtinen, Harder Than Hard, 2015
Archival pigment print, 30 x 30 cm
Janne Lehtinen’s art is a mixture of sculpture and performance and is realized in the studio or in natural surroundings with no audience. These performance-enhanced, staged photographs carry a sense of melancholy bordering on absurdity. It’s more of a dance where the head follows the heart with the photographs representing the moment the two merge. He has, throughout his career, exercised an extremely personal approach in reflecting upon his life using himself as his own model. In the futured photo we find him as a solitary figure balancing himself between bricks, balloons, and his need to disappear. 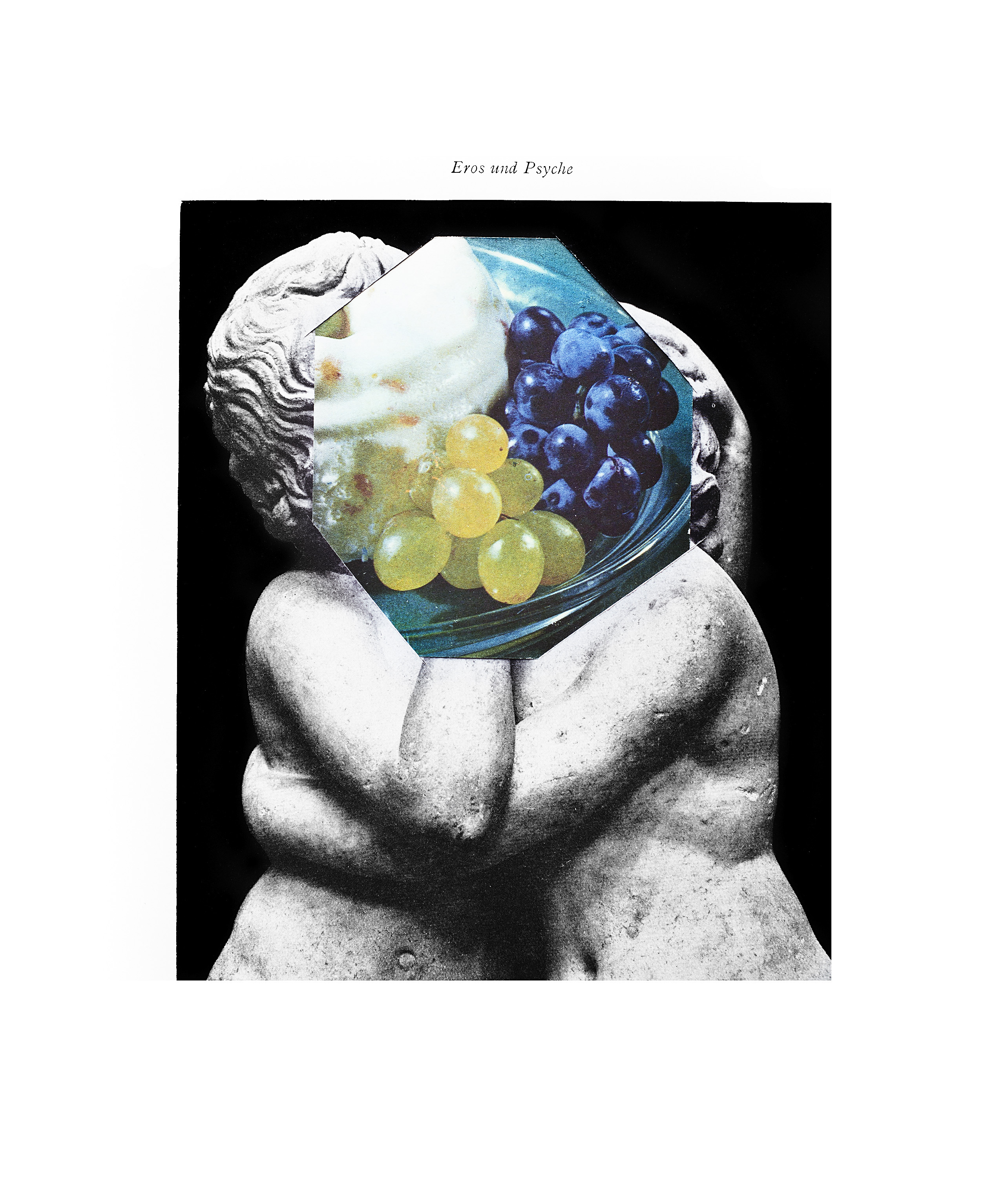 Ville Kumpulainen, Eros and Psyche, 2020
Archival pigment print, 45 x 38,52 cm
For Ville Kumpulainen archive materials are like archeological findings. He begins by creating his sculptures based on found photographs and archival negatives, which he dismantles and recomposes by cutting, tearing, folding, and rearranging. He then challenges his viewers with his assorted combinations of images that re­define their form through words associated with another meaning, which he collects over time. He addresses the issues that arise from the tensions between a constructed environment and a natural one, focusing on the hidden instincts that lay within.
The myth of Eros and Psyche is one of the best-known love stories in mythology. Eros was throwing arrows at people to hit their hearts and make them fall in love. Psyche, a beautiful maiden, is a symbol of the soul purified by passions and misfortunes.
contact us:
berlin@personsprojects.com
________________________________________________
Anni Leppälä, Mirror (Blanket), 2011
Archival pigment print, 21 x 31,5 cm
Anni Leppälä is one of the most outstanding Helsinki School representatives, whose acquired recognition on a global scale. She was awarded the title the Young Artist of the Year in Finland, 2010. Her photographs are timeless images that evolve out of a trust stemming from how we as viewers are invited into her world as neutral observers. They all share a universal feeling of something familiar. She uses her images as a poet with words, leaving us with something "outside” the image, something out of sight, a sensibility without a face to name it.
In her Mirror (Blanket) work, the spectator can find a young woman dressed in red with her back turned against the spectator, hiding her face. Läppala often uses the red color, which symbolically may be related to a time when a girl becomes a woman, or it is often associated with passion and love or danger. The photo uncovers hidden emotions, memories in dreamlike settings, which convey a deep sense for a place that’s not hers to own but to share.
contact us:
berlin@personsprojects.com
________________________________________________ 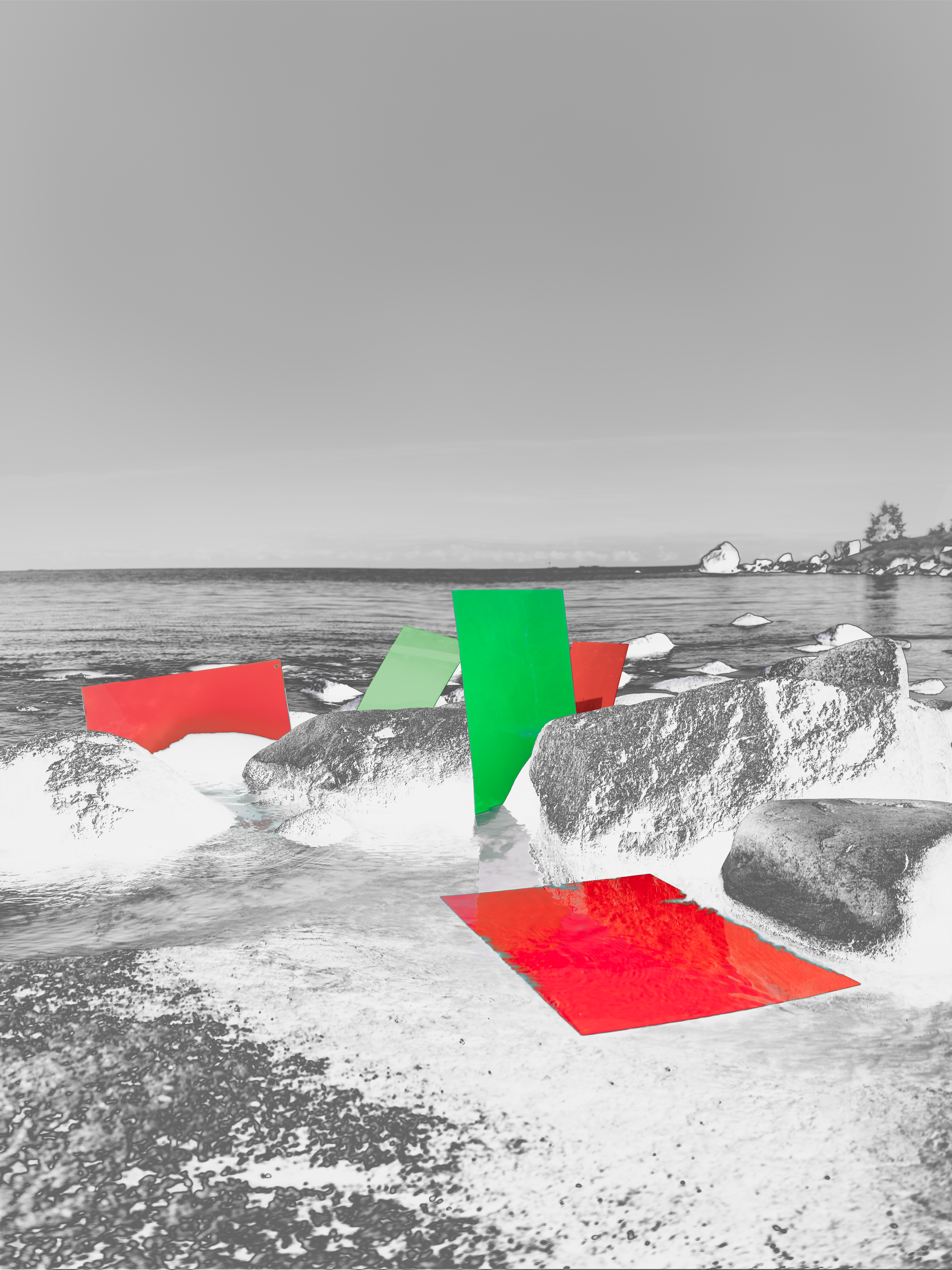 Jaakko Kahilaniemi, All Play Every Day, 2018
Pigment print, framed, 46,67 x 35 cm
Jaakko Kahilaniemi is drawn to places of radical interference between people and the natural forces. With his series Nature Like Capital he explores the complex and contradictory relationship today’s society has in coexisting with nature and finding their mutual path for a healthy future. His images reflect his intentions for bridging a joint understanding between how we live within our environment in contrast to the nature of who we are as a society.
Whether it be his own inherited forest or the aftermath of a forest fire from another property, Kahilaniemi presents his ideas in a minimal way letting the image speak for itself. He creates a visual language that unveils its secrets by challenging the viewer to step outside their own preconceived comfort zones, and look at the broader context of where we fit in to the nature of all things.
contact us:
berlin@personsprojects.com
________________________________________________ 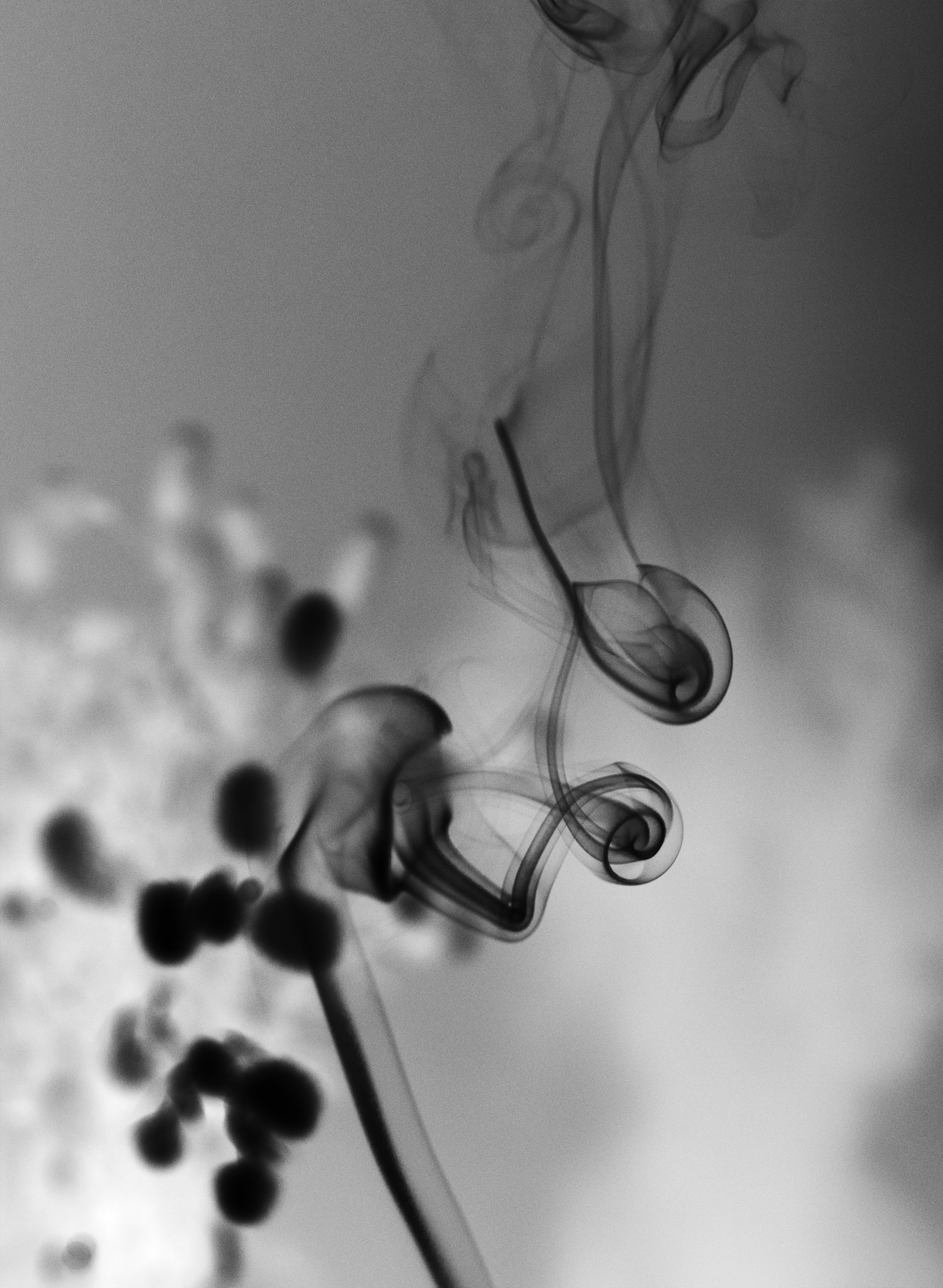 Mikko Rikala, g, when burned, produces smoke that transcends the mundane, 2020
Pigment print, 31,4 x 23,9cm
Mikko Rikala’s works represent research into spatiality and temporality that emerges from both philosophical as well as scientific, nature-related thoughts. His preferred medium is photography, although he frequently references and revisits drawing and sculpture. He uncovers the relationship between what is seen as rational on the one hand and what is perceived as irrational on the other. His work is a reflection that merges mystical and philosophical thoughts through the empirical process of observation.
In his recent work, when burned, produces smoke that transcends the mundane Rikala uses his camera as a means for monitoring through the meditative act of observation in drawing out the medicinal to the philosophical aspects inherent with the physical plane of what an object is, be it a plant, rock or bees hive. He creates visual dichotomies that contrast opposing world views in how we should be living with nature as opposed to using technology as a tool to overpower it.
contact us:
berlin@personsprojects.com
________________________________________________ 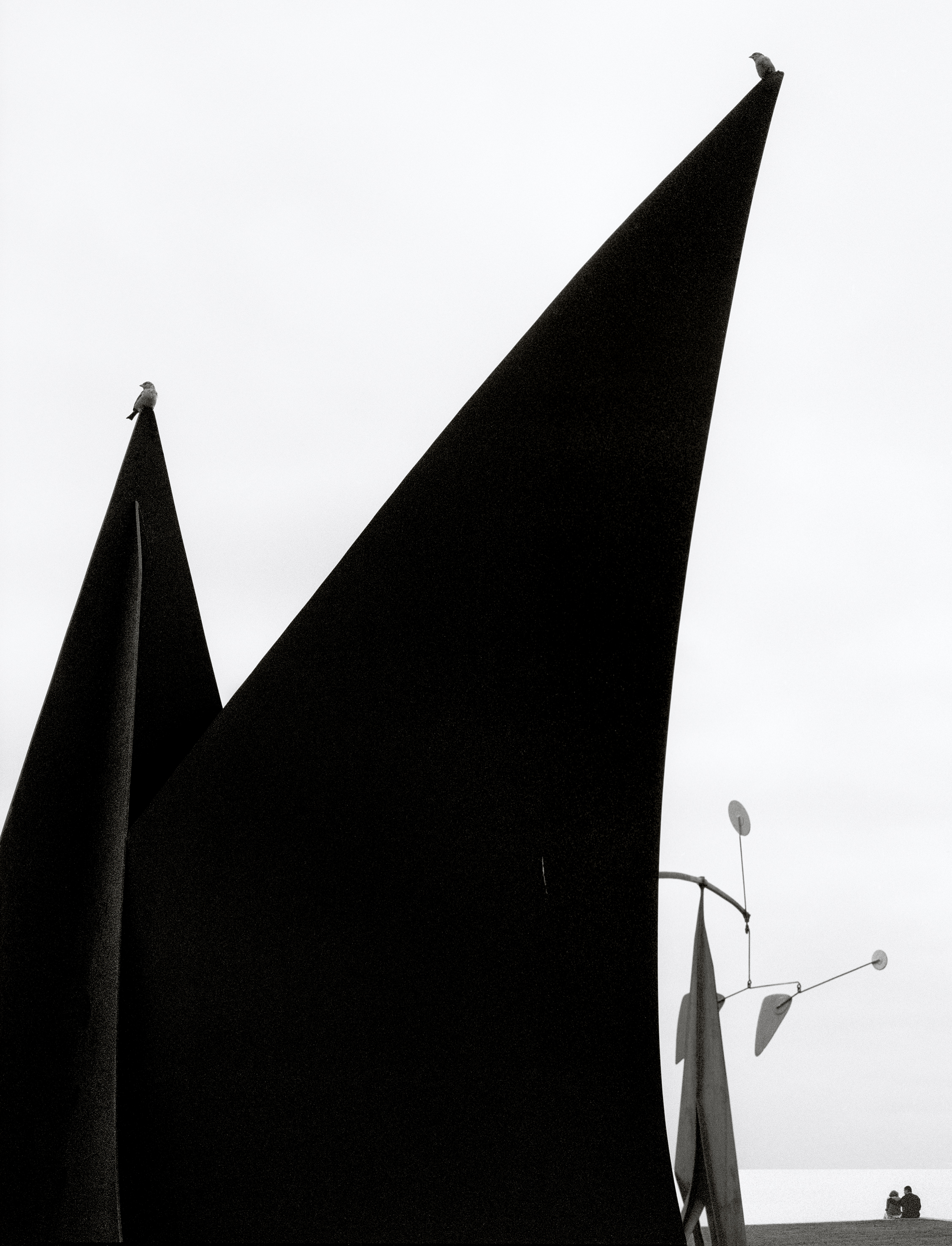 Pentti Sammallahti, Denmark Humlebæk, 1999
Silver gelatin print, 18,8 x 14,5 cm
Pentti Sammallahti is one of the most celebrated internationally accomplished photographers to ever emerge from the Nordic region. He is both a mentor and master on every level of the photographic process. Whether it is a man, tree, or animal, his chosen subjects all seem to move unassumingly within the image's frame, lyrical in their compositions. His photographs feel as if they were alive as if they vibrate with a vitality that can't be merely chemically induced but rather emotionally conceived. Sammallahti's photographs reflect a life commitment to finding the balance within nature not as an outside observer but as a voyager within. His works contain the essence of what photography is truly about: timing, light, and capturing the magic of the moment. In this regard, Sammallahti states: "My photographs are not taken, but given to me." The essence which additionally is confirmed by inventing his own printing techniques and meticulously toning system.
contact us:
berlin@personsprojects.com
________________________________________________
Milja Laurila, Little Dancer, 2016
UV-print on acrylic glass, 25 x 20 cm
Milja Laurila is one of the most important artists of the Helsinki School who research into the perception of femininity.
The half-naked body is printed on transparent acrylic glass, which makes the figure translucent, almost weightless. The vitreous print, which can be associated with the glass plates used in photography, work as a metaphor for the fragility of the portrayed subjects. The clear and hard material enables the figures to be formed through chiaroscuro as three-dimensional reflections on the walls. These soft shadows are bound to the movement of the viewer.
Milja Laurila is investigating how the concept of knowledge is constructed through images.
Her works raise questions through their transparency in how our pictorial realm is perceived through the act of being looked at. She plays with the ability of a photograph to transmit the representation of reality. By detaching the images from their original context, the artist places them in a challenging position; she lets them speak on their own, in their own voice. Laurila’s delicate human figures, who instead of representing the depicted individuals are actually reflecting our way of perceiving the world. She asks, if images detached from their original context, still remain related to the original semantic field or transform into something else.  Can an image of a young girl’s spine suffering from scoliosis transform without captions into a sculptural beauty?
contact us:
berlin@personsprojects.com