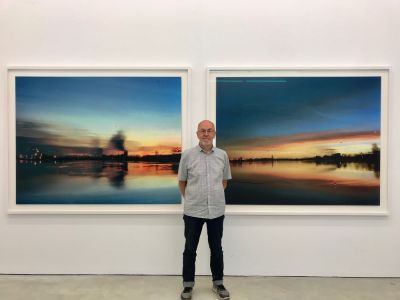 Jorma Puranen has become known for his works that arouse considerations spanning the past and the present. His subject matter has ranged from illustrations of scholarly works and ethnographic photographs to historical portraiture and landscape paintings. With points of departure often found in archives or museums and a rather undisciplined approach to archives — fragmentary rather than systematic. In Puranen’s work, the photograph becomes a place for readdressing a fluid past. His photographs are both of the past and the present. It could be said that reflection as such is Puranen’s theme. In fact, he appears to be saying that light is the only reality to which the photograph has access.
In his Icy Prospects series, beginning in 2005, Puranen creatively merges a mixture of mythology, history, and the Nordic fascination that surrounds the notion of polar exploration and the North Pole into his dream-like landscapes. His images reflect a place that is borderless, floating in time, a reminder of the immensity of the unknown that is associated with life above the Arctic Circle. Puranen states: "For fifteen years I have been engaged in landscape projects in which I have prevented direct admiration of the natural scenery by putting something in between the viewer and the subject.” With Icy Prospects, Puranen captures these dream-like melting landscapes by masterfully using an elevated handheld painted and lacquered wooden board, which he then photographs as it mirrors the image it’s reflecting.
Jorma Puranen was born in 1951 in Finland. He lives and works in Helsinki. Puranen graduated from the University of Art and Design Helsinki in 1978, where he then taught until 1998. As one of Finland’s most well-known photographers, his works have been published and reviewed around the world and widely exhibited in Europe, the United States, Canada, and Asia. They are represented in numerous international collections, such as those of the Bibliothèque Nationale, Paris, France, the Finnish Museum of Photography, Helsinki, Kiasma Museum of Contemporary Art, Helsinki, the Moderna Museet, Stockholm, Sweden, and the Victoria and Albert Museum, London, UK.