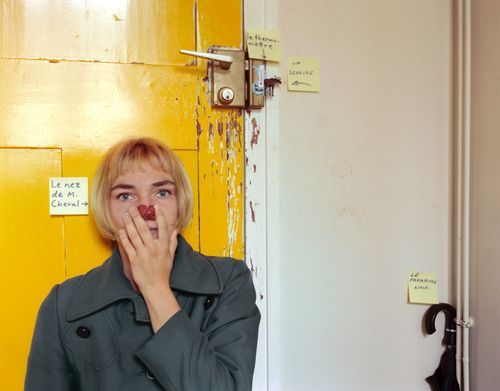 Throughout her career Elina Brotherus has worked with photography and moving images using intimate stories to replay implicit feminism: her self-portraits investigate the relationship between the female individual and space, questioning humanity’s place within nature. Her artistic work follows her personal metamorphosis in how she sees herself both in front of and behind the camera. In a way, she eliminates the question of authorship and focuses her attention on the invitation to create her own interpretation, with closeness yet cool conceptual distance. Brotherus’s oeuvre has alternated between autobiographical to art historical approaches through utilizing the principal ideas of the Fluxus Movement – which marks the starting point for her series One Minute Sculptures, Meaningsless Work and The Baldessari Assignments – as well as iconic images from 19th and 20th-century paintings. By that she creates an equilibrium between the more objective conceptual thinking of art-making and its histories, combining it with the emotional and personal – also allowing herself to be influenced by a wider range of artists including film makers, photographers, painters and poets.

Elina Brotherus (*1972 in Helsinki, Finland) is one of the most known contemporary Finnish photographers and video artists. She graduated with a Master of Arts degree in photography from Aalto University School of Arts, Design and Architecture in 2000. Her works have been shown in multiple solo and group exhibitions throughout Europe, Asia, North and South America since 1997. Brotherus has been awarded with the Finnish State Prize for Photography, the Prix Niépce Gens d'Image (France), Carnegie Award's Young Artist’s Scolarship (UK) and the Prix Mosaïque of Centre National de l'Audiovisuel (Luxembourg). Her works are included in numerous collections such as Saatchi Collection, London (UK), ARKEN Museum of Modern Art, Ishøj (DK), Hasselblad Center, Gothemburg (SE) and DZ-Bank Art Collection (DE).